For gardeners scratching their heads over what to plant in those areas of low light, it’s often the Hosta that comes to mind. This plant is regularly recommended by gardening friends or attendants at garden centers, and, for good reason. Perennials that pack a punch, such as the myriad of Hosta varieties available, always help bolster shady areas and aid gardeners in their pursuit of beauty.

Texture is one of those all too important design elements that is often overlooked. Hosta can help in spades. The contrast of their splendid leaves (and for that matter flowers) to other shade-loving plants is where the magic happens. Companions such as variegated Solomon’s Seal, Heuchera, strawberry Begonias (Saxifrage) Ajuga, and Begonia grandis are just a few old standbys I lean into for perennial staying power. Annuals such as impatiens, caladiums, and wishbone flower (Torenia) can add to any display.

Texture and size aside, color also plays an important role. I tend to divide Hosta into four color foliage categories: blue/grey, green, chartreuse, and variegated. I have organized some of my favorites in each category, which will hopefully help as you make choices for your garden this season. 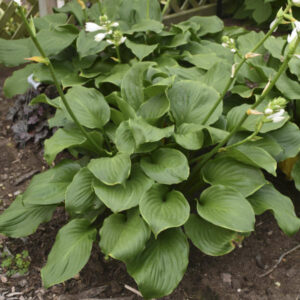 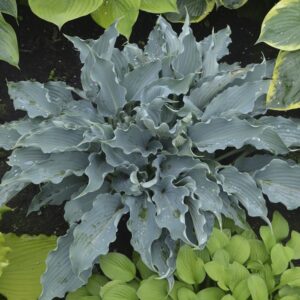 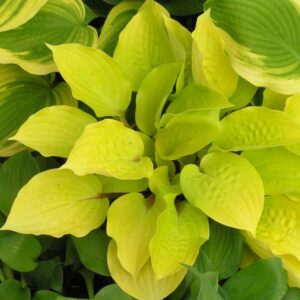 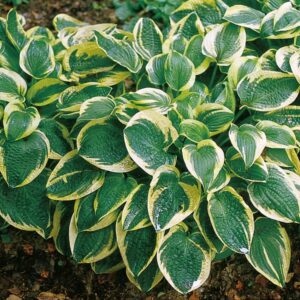 The list of shade-loving plants, of course, could go on and on. Recently, I’ve been keener than ever to find easy,  yet stylish combinations of shade perennials for the emerging shade gardens at Moss Mountian farm. With lots of space to fill, it’s a big, and I must say, an exciting canvas on which to ‘paint’.

When filling large spaces Hosta can help provide immediate and perennial visual interest. Over the years, I have taken advantage of the now-famous Gilbert H. Wild’s ‘Hosta by the Handful’ offering. It’s quite literally a mixed, unlabeled bag of Hosta varieties where the results can be astonishing. Part of the fun is seeing what emerges out of the collection! ‘Patriot,’ ‘Christmas Tree,’ ‘Gingko Craig,’ ‘Captain Kirk,’ and even some of the really large ones such as ‘Regal Splendor’ pop up out of the mix. These are “oldies but goodies” in my opinion that have been and continue to be around for good reasons. Quite simply, they perform well and are beautiful any way they are used.

I too often think of Hosta for the garden and forget their value in containers. Wow! What an impact they can make with the addition of some Coral bells (heuchera), Ajuga, and Creeping Jenny. I’ve had Hosta return for up to 3 to 5 years in containers with little to no winter protection. Talk about hardy!

Admittedly, as a designer, I fall back on those plants that have proven their mettle over time. I think it’s a practice exercised regularly by many designers, of all types. One example was Russell Pages’ regular use of rose ‘Iceberg’, and he cites it regularly in his book An Education of a Gardener.  I first saw his use of this prolific floribunda firsthand at Badminton in the mid- 1980s. Sadly,  he’d just passed away, but Caroline and David Beaufort had carried on with his design of which ‘Iceberg’ was front and center. Similarly, I fall back on the old reliables such as Hosta ‘Elegans’ and ‘Krossa Regale’, both elegant, grey-hued plants, that rarely disappoint.

From the giants such as ‘Empress Wu,’ ‘T Rex,’ and ‘Royal Standard’ to the more dwarf and diminutive forms, these plants can play an outstanding role in any garden.

I’ll close with a strong memory of a garden where I saw how the gardener had used as a focal point in a woodland garden a large single container filled with the chartreuse colored Hosta ‘Sum and Substance’. Around this central object was Creeping Jenny filling the spaces between the stones of the pathway that encircled it. The effect was that of a bowl of light with the sunshine pouring into this area of the garden. Quite a dramatic and memorable scene! It is memories like this that I can link back to where my love for gardening began.

Ringing in Spring with Coral Bells by P. Allen Smith

Make Your Garden Magnificent With Mums

Stay In Touch With Us

Simply enter your email to receive special deals and updates!

Stay In Touch With Us

Simply enter your email to receive special deals and updates!