For me peonies have always represented a flower of great abundance, bringing joy to all those who experienced them. We all owe a debt of gratitude to all those over the past thousand years or so who participated in the cultivation and improvement of peonies through thoughtful hybridization. 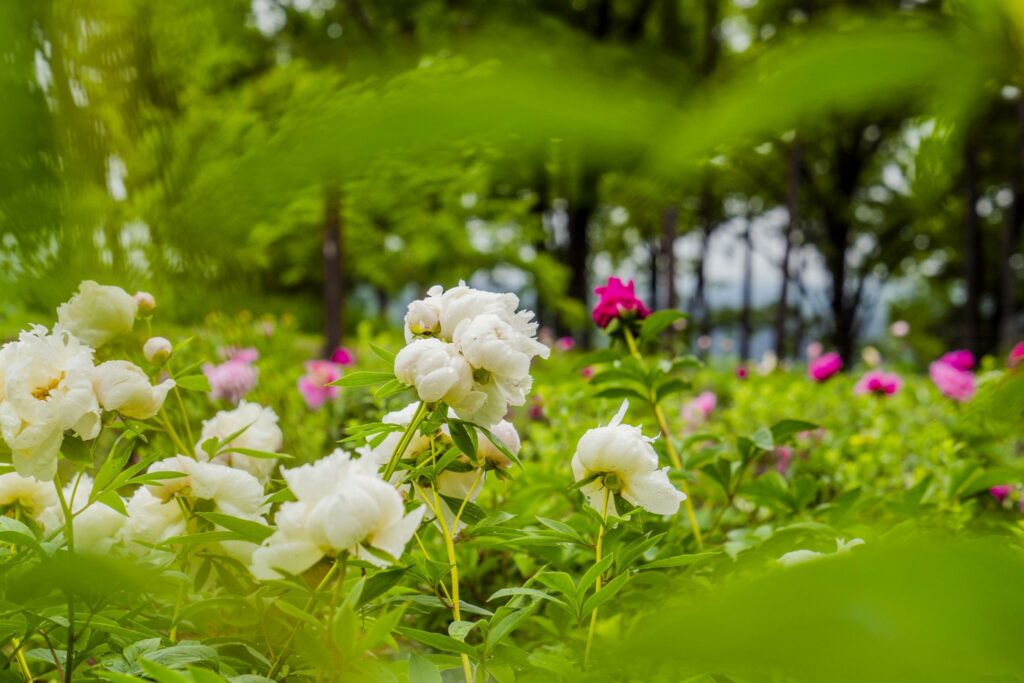 Today at Moss Mountain Farm we keep over 40 varieties of herbaceous peonies; many of them recently planted. Perhaps it’s worth noting that the first plant that I planted at Moss Mountain, many years ago, was an old and familiar peony. It was a common variety that I recall my great grandparents having on their farm in Tennessee, one called ‘Festiva Maxima’, that originally was hybridized in the mid 19th century. 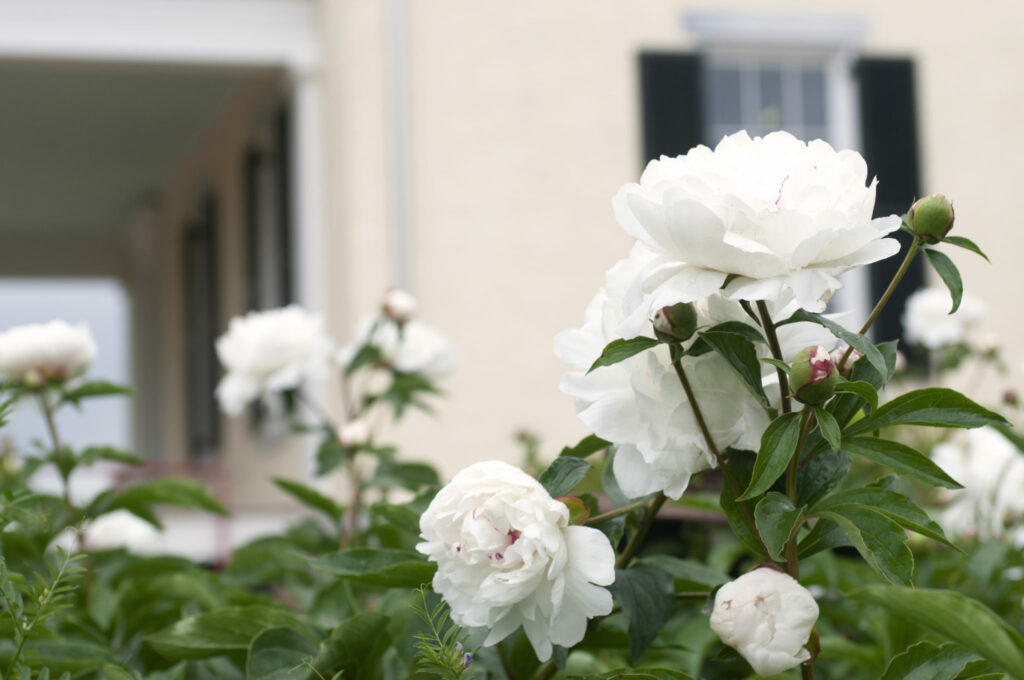 I always remembered its large blooms, creamy white, with flecks of magenta occasionally marking its petals. No doubt this was one of those beloved ‘pass along’ plants shared among neighbors, friends, and family; lauded for its ease of care and dependable abundant blooms.

Three years ago I set out in earnest to create a peony display for our visitors to enjoy and for them to be cut and used in the house. My goal in selecting varieties was simple, and that was to extend the peony bloom as long as I could by selecting early, mid, and late blooming varieties.

Fragrance, too, was a criterion that was important to me. I learned from my friend Greg Jones at Gilbert H. Wild and Son that two of the most fragrant varieties are called ‘Myrtle Gentry’ and ‘Dr. Alexander Fleming’ so I made sure those were included in my order. 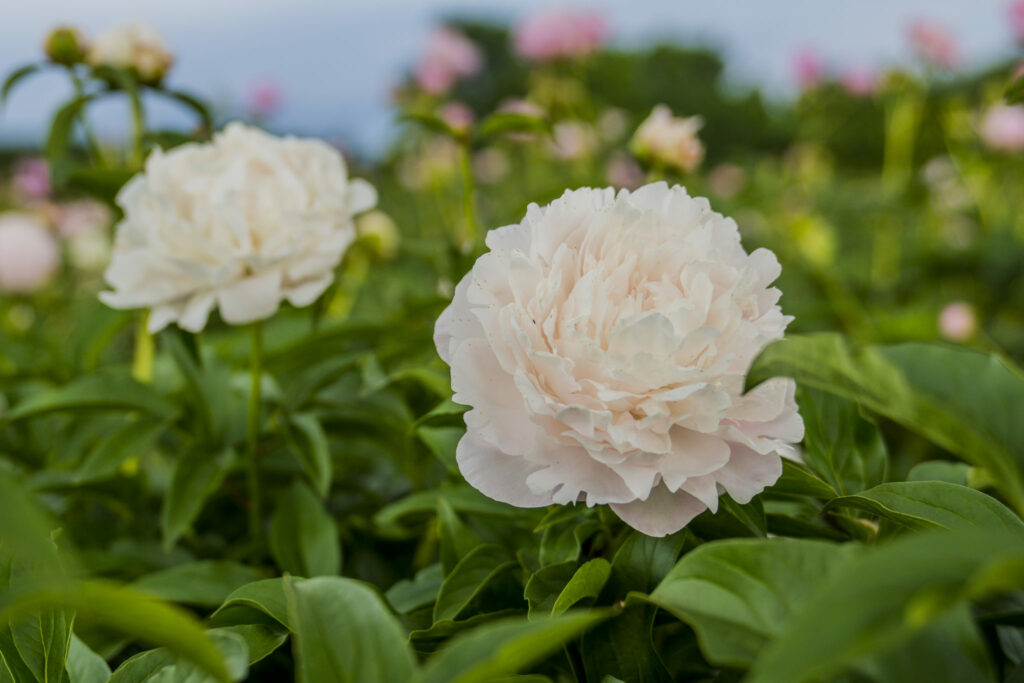 Gilbert H. Wild and Son have been growing peonies since 1885 starting their long legacy of growing them as cut flowers for the Kansas City and Chicago markets. From there they began to sell the tubers of the varieties that they were growing as cut flowers … and soon, due to their success, the family began selling the rhizomes and roots of other perennials such as iris and daylilies nationwide. Because of their long history in the cultivation of peonies, over the years they have collected an outstanding range of heirloom varieties and have made them available to the public. Some of them go back into the mist of time, now virtually forgotten, yet others, such as ‘Sarah Bernhardt’, continue to enjoy a run of popularity since it was named for the popular 19th-century actress. 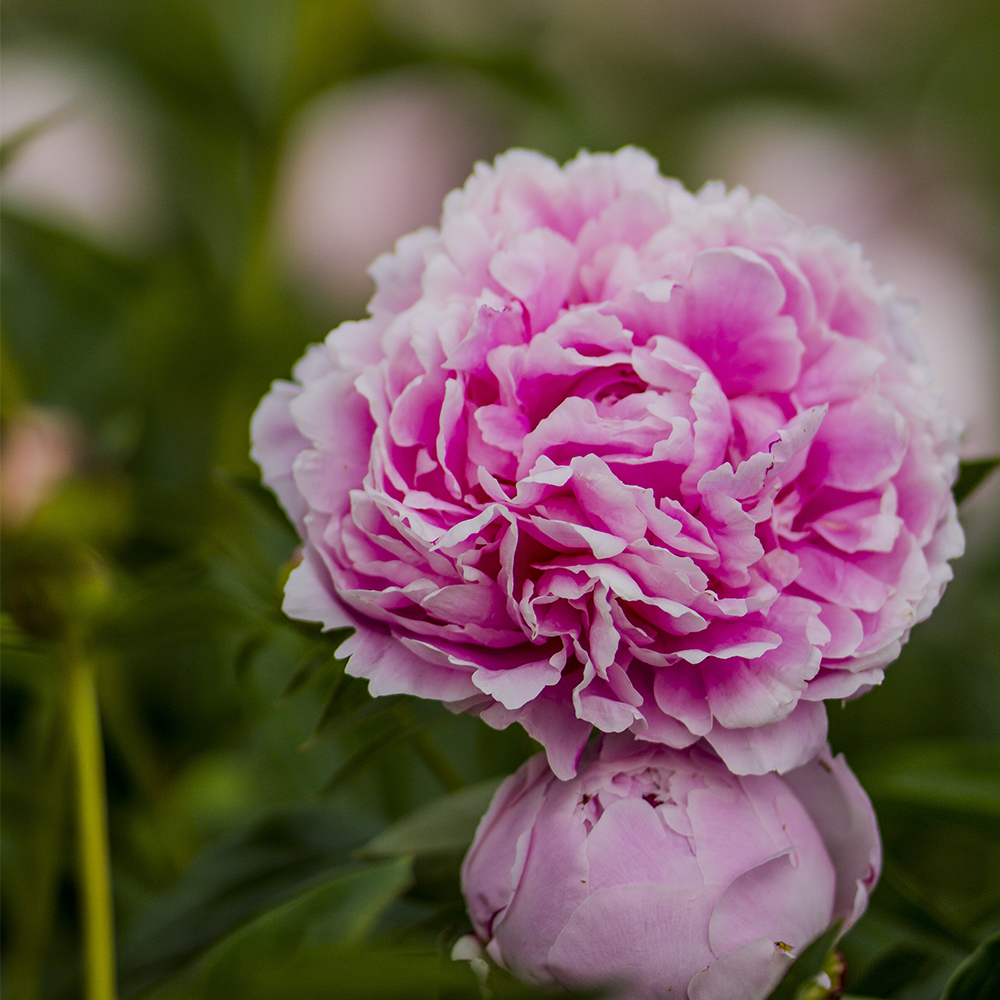 For those that know me, because of my love of flowers, my passion (yet again) got out in front of me. Certainly, this was the case here when I slightly lost my mind. I ordered 36 varieties 10 of each which made a whopping order of 360 tubers that had to be planted soon after arrival; no small chore.

This was a major step for me into the realm of peony collecting and it wasn’t without a good deal of pre-planning, preparation, and staging. That summer, once my order was confirmed for early fall delivery, we began laying out the new home for my burgeoning new collection in 18 rectangular beds on the east side of the vegetable bed. Each of these beds would contain 20 tubers each. The edges of the beds were defined and the soil within them was fortified with heaps of our homemade compost.

When the tubers arrived, freshly dug and robust, we were ready to get them into the ground, almost immediately. I took particular care in making sure each tuber was set with only about 1/2” of soil covering their bright red eyes (in the south planting them shallow is preferred and slightly deeper as one plants further north). Getting this detail correct was important to me as I had always known that the three main reasons peonies don’t bloom are because the tubers are planted too deeply, the plants require feeding and they are planted in areas of too much shade (over time the shade of trees can encroach upon them, reducing essential sunlight). And, it sounds to be said to gardeners in more southern regions should consider planting the early flowering varieties, such as ‘Coral Charm’ or ‘Coral Sunset’ for the best success.

By the end of September, they were all nestled snuggly into their beds. We planted Russian Sage (Perovskia atriplicifolia) along the edges of each bed to provide a haze of purple bloom long after the peony blooms faded. These plants are also aromatic and are good additions to the garden for pollinators.

The first year of bloom that next May was nothing short it astonishing. The blooms were more abundant and plant larger than I had expected. 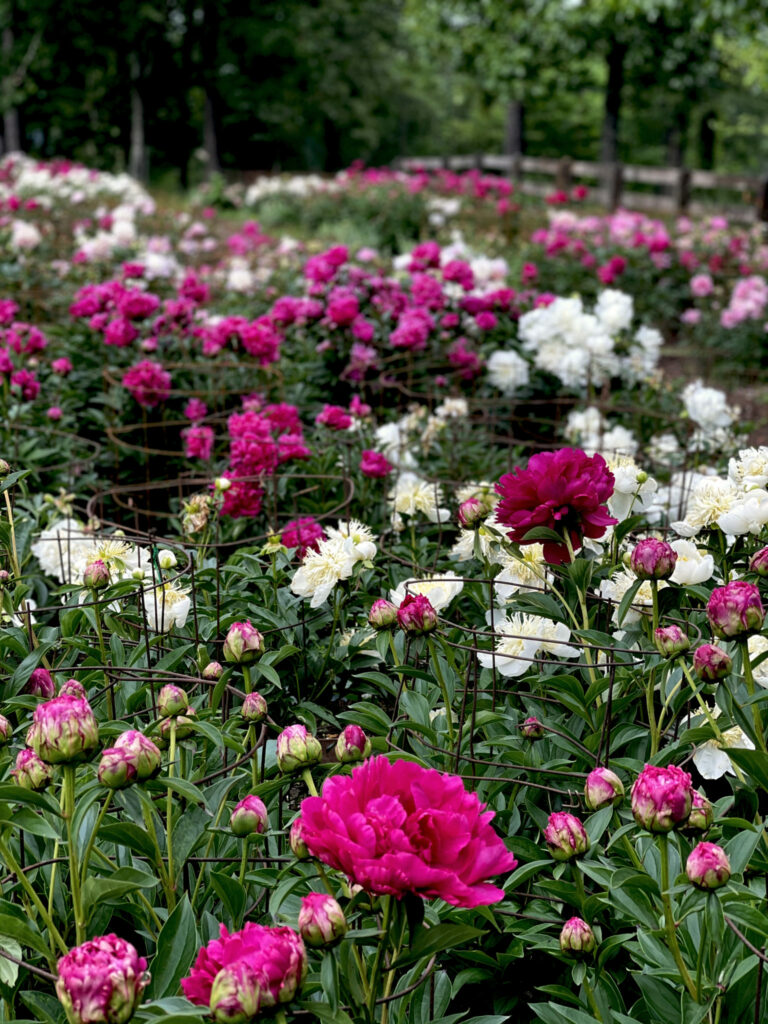 That first year I resisted cutting too many blooms and made sure I removed all of the spent flower heads in order to encourage the plant to store more energy in their tubers rather than in seed pods.

To cultivate greater bloom and vigor among our plants each late February, before the eyes emerge into stems, I weed the beds and add our nutrient-rich compost around the plants. I also take the time to go ahead and apply a light layer of mulch to keep the weeds at bay. And, then finally, some weeks later in March, once the stems are about 6-8 inches tall, I cage each clump. These are simple round cages, approximately 24” tall made from concrete reinforcing wire. These supports allow the stems of the plants to grow through them helping to hold high the eventual blooms all the time keeping them from being beaten to the ground by one of those inevitable heavy spring rains.

Today these beds and this display are a glorious sight to behold for our visitors. And, now because the plants are established I’m more inclined to cut and share them, perhaps making this the most rewarding aspect of planting so many. And, yes, as you might suspect, I am already looking for places to add more this fall!